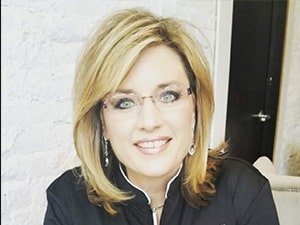 Born and raised in Scotts Bluff County, Lamp earned her bachelor of journalism degree from the University of Nebraska–Lincoln in December 1993 with minors in psychology, anthropology and history. She worked as a photographer for the Daily Nebraskan and as an agriculture writer for the Department of Ag Communications at the Institute of Agriculture and Natural Resources. After college, she was hired as the agricultural reporter and photographer for the Beatrice Daily Sun and later was recruited by Bader Rutter & Associates, the leading agricultural-based public relations and advertising agency in the United States. She moved to Milwaukee, Wisconsin, and lived there for three years before moving to Montana, where she continued to work for the agency. In 2009, Lamp opened Lamp Public Relations & Marketing and continues to maintain the office she started at Billings Livestock Commission. Lamp and her husband, Mike, moved to Mitchell, Nebraska, in May 2015 with their children Mark and Jessie. The American Doorstop Project is a joint-venture agriculture advocacy collaboration between Lamp and Melody Dobson. The project preserves and promotes historical stories through the identification formula of the Space, Place, Invention, Commodity or Event, and the People that have shaped the U.S. over the past hundreds of years. American Doorstop Project features a collection of stories that were instrumental in shaping America’s agricultural roots. They have published a book “A History of Nebraska Agriculture: A Life Worth Living,” in June of 2017.