Chautauqua is a unique opportunity for communities to explore key time periods of history and culture that still affect our lives today.

"The Fifties in Focus" will be in Ashland during Summer 2021

Remember the 1950s? It was a decade that is often looked at with a sense of nostalgia and romanticism. But the 50s was also a time of sweeping change that can now be revisited with a more objective eye. Television, hot rods and rock-and-roll changed the way we spent our our free time. However, it wasn’t all idylic.

Previously planned for late summer 2020, “The Fifties in Focus” will be hosted in Ashland during the summer of 2021.

“Because Ashland is an ideal host for Chautauqua, the committee and Humanities Nebraska decided together that it would be better to postpone the event to next year, rather than proceed in a time of uncertainty and potential concern of spreading the COVID-19 virus,” explained Chautauqua manager Kristi Hayek Carley.

Until then, HN and the Ashland community will present programming and activities that will allow for the exploration of the 1950s this summer while staying socially distant. See the list below. Other opportunities will be added soon.

Would you like to know when activities are added and plans for Virtual Chautauqua or Summer 2021 are finalized?

Humanities Nebraska presented this new style of Chautauqua to give participants multiple opportunities to explore the social, economic, political, and international changes of the 1950s. There was a variety of activities and events for Nebraskans of all ages to enjoy, led by various experts and scholars. In 2021, “The Fifties in Focus” returns with many of the same scholars, but quite a few new things to enjoy as well in Ashland. Stay tuned for more details!

With origins in the late 19th century, Chautauqua combines oratory and lectures with literary readings and musical entertainment. In the past, these touring groups would entertain and inform people living on the plains about political and cultural happenings. The name itself comes from a resort community in New York State where in 1875, a summer program of lectures, sermons, and music attracted such enthusiastic audiences that within a few years similar programs sprang into existence for the public in other parts of the country. Today, Chautauqua upholds the tradition of offering entertainment, education, and community-based heritage. Humanities Nebraska has re-imagined Chautauqua to include contemporary experts offering insight regarding how historic events and achievements affect our lives today, along with scholars-in-residence presenting first-person portrayals of some of our most important historical figures. It’s family-friendly fun, history and activities for all ages.

The 2021 Nebraska Chautauqua is sponsored in part by: 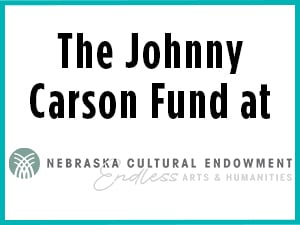