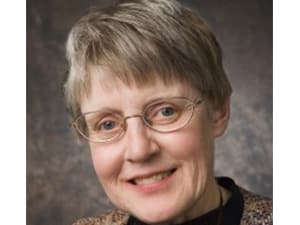 Dr. Eileen Wirth is a professor emeritus of journalism at Creighton University and a senior writer for Legacy Preservation. A native of Nebraska City, she was a reporter at the Omaha World-Herald and a public relations writer for Union Pacific Railroad before joining Creighton in 1991. She chaired the Department of Journalism, Media & Computing for 19 years and retired in 2016.

Wirth has written eight books including several on regional history. These include From Society Page to Front Page, the history of Nebraska’s women journalism; Historic Omaha Houses of Worship and her forthcoming book on the history of Omaha’s Henry Doorly Zoo and Aquarium.

Long active in the community, Wirth is a member of the Nebraska State Historical Society Board and a former president of the Omaha Library Board, the Omaha Library Foundation, Friends of the Library, the Omaha Press Club Foundation and St. Cecilia’s School Board. She is a member of the Omaha Press Club’s Hall of Fame and the Jaycees Ten Outstanding Young Omahans Hall of Fame. She also received the 2019 Communicator of Achievement Award from the National Federation of Press Women. She has a B.A. in Journalism and Political Science from the University of Nebraska-Lincoln, an M.A. in Political Science from the University of Minnesota, an M.A. in Journalism and a Ph.D. in Political Science from UNL.