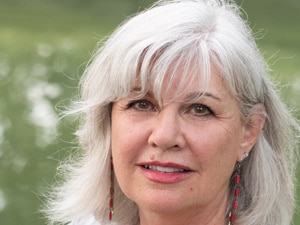 Karen Gettert Shoemaker is the author of the novel The Meaning of Names (Red Hen Press, 2014) and Night Sounds and Other Stories (Dufour Editions, 2002; UK edition – Parthian Press, 2006). She has published stories in the Prairie Schooner, the London Independent, The South Dakota Review, Fugue, Kalliope, and others. Her stories and poems have been anthologized in A Different Plain: Contemporary Nebraska Fiction Writers; Times of Sorrow/Times of Grace; An Untidy Season; and Nebraska Presence: An Anthology of Poetry. She has received fellowships to Brush Creek Ranch Artist Colony and the Kimmel Harding Nelson Center. She is the recipient of a Nebraska Center for the Book Award for Fiction; two Independent Artist Fellowships from the Nebraska Arts Council, and a Nebraska Press Award for Feature Writing. She is a faculty mentor with the University of Nebraska MFA in Writing Program.