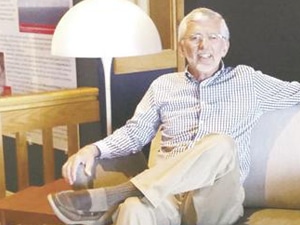 John Mark Nielsen is executive director of the Museum of Danish America in Elk Horn, Iowa, and emeritus professor of English at Dana College. In 2012 Queen Margrethe II of Denmark bestowed on him “Knight of the Order of Dannebrog” for building relationships between Denmark and the United States. A 1973 Dana graduate, Nielsen received his M.A. from Creighton University and his Ph.D. in English from the University of Nebraska-Lincoln. In 1977 he was awarded a Marshall Fellowship for study in Denmark, and in 1983-84 he was a Fulbright lecturer in American literature at several colleges in Denmark. During that time he was a consultant to the National Museum of Denmark in preparing “The Dream of America,” an exhibit on Danish emigration to the United States. In 1999 the Carnegie Foundation for the Advancement of Teaching named him the 1999 Nebraska professor of the year, and in 2000 he was a Fulbright senior lecturer in American literature at Mercy College of Calicut University in India.