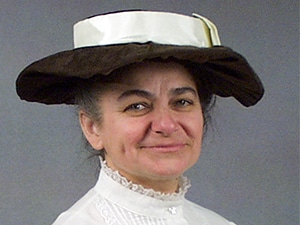 Helen M. Lewis teaches literature and humanities online for Western Iowa Tech Community College, Sioux City, Iowa. She received her degrees from Wilkes College, Wilkes-Barre, Pennsylvania, and the University of Maryland at College Park. While teaching at the University of Nebraska at Omaha, she received a 1990 NEH Summer Fellowship to study women Romantic poets at the University of Pennsylvania in Philadelphia.  Serving on the board of the Popular Culture Association, Lewis remains an active public speaker in humanities, in such areas as women in Westerns; frontier history, including Theodore Roosevelt in the West; and women’s history during the Progressive Era and World War I. Since 1999, Lewis has portrayed Jane Addams for Chautauqua and humanities audiences from Oklahoma to North Dakota. She also has developed Nebraska native Grace Abbott for Chautauqua portrayal.  Lewis adapts the portrayals to themes desired by the individual audiences.