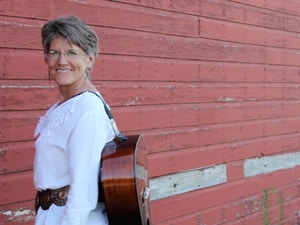 Deb Carpenter-Nolting expresses herself in a number of ways. She is a poet, essayist, newspaper columnist, songwriter, performing artist, and teacher.Deb is the author of three books: Grizzly Attack in Colorado: The Ed Wiseman Story (P.L.A.N. Publishers 2013); Nature’s Beauty Kit (Fulcrum Publishing 1995); and Chadron (with Ken Korte and Composition I students. Arcadia Publishing 2004). She has published articles in Nebraska Life Magazine, Colorado Life Magazine, Plains Song Review, and Cattle Business Weekly. Many of her stories and poems can be found in anthologies. She has recorded several poems and songs. Some of her work has been featured on radio and television programs. Her most recent album is Windblown, produced by Martin Gilmore in 2012.

Deb has performed at a variety of venues, including libraries, museums, festivals, schools, poetry gatherings, brandings, cancer walks, conferences, banquets, and private events. She also conducts workshops for all ages. She has taught all grades, from one-room schools in rural Nebraska to high schools in Nebraska, South Dakota, and Wyoming, to a tribal college in South Dakota and Chadron State College in Nebraska. Deb holds a Bachelor of Arts Degree in Literature and a Masters of Arts in Education. She is listed in Who’s Who Among American Teachers and was awarded Instructor of the Year at Oglala Lakota College. Other awards include Master Storyteller (Buffalo Commons Storytelling Festival) and Individual Fellowship Merit Awards from Nebraska Arts Council (Performing Arts: Composition 1996), (Literature: Fiction 1995).