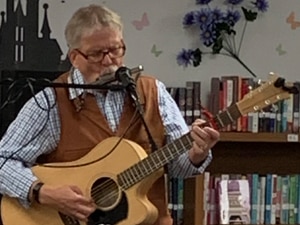 Dan Holtz is a recently retired professor of English at Peru State College, where he taught from 1987 to 2016. He is the recipient of the 2000 Nebraska State College System Teaching Excellence Award and the 2015 Addison E. Sheldon Award for the preservation and interpretation of Nebraska history. He is also a past president of the Board of Trustees of the Nebraska State Historical Society and currently serves as a member of the Nebraska 150 Foundation, a statewide committee involved in planning Nebraska’s Sesquicentennial celebration/commemoration. He has performed and presented programs for civic, historical, and literary organizations across Nebraska as well as at the Nebraska State Capitol, the Nebraska State Historical Society, the Stuhr Museum of the Prairie Pioneer, Scottsbluff National Monument and the John Neihardt Center. Additionally, he has appeared at the Kennedy Center for Performing Arts and at the Bob Devaney Center for the state quarter dedication ceremony in 2006. In June of 2016, he released his second CD, “All Original, All Nebraska,” a collection songs he wrote about people, places, and events in Nebraska.