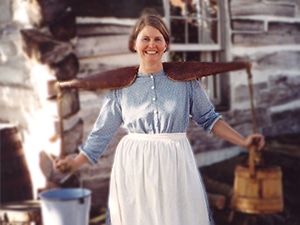 Cherrie Beam-Callaway doesn’t lack for stories as she has spent nearly 25 years gathering and recording historic tales from Nebraska families. Cherrie boasts of being a “true Nebraskan,” as she has lived in both ends of the state and is a fourth generation farm girl. The pioneer stories are factual and reflect the diversity of the people and land from western to eastern Nebraska. Cherrie is an educational storyteller who speaks with an Irish brogue, dresses in period attire and delivers spell binding one-act plays that make audiences laugh and cry. Speaking for more than 35 years to all ages, her venues include elementary, especially 4th grade, through high school, libraries, museums, adult and youth church groups, senior centers, banquets and festivals. Cherrie traveled Nebraska as a storyteller on the wagon train commemorating the 150th birthday of the Oregon Trail. She is co-founder of John C. Fremont Days, one of Nebraska’s largest annual historical festivals, and founder of “A Day in the Past,” an annual day for 4th graders. She is recipient of a number of community and statewide awards for historical preservation.