2018 Governor's Lecture in the Humanities

"Tumult, Tragedy and Hope: America in 1968 from a Half Century's Perspective" 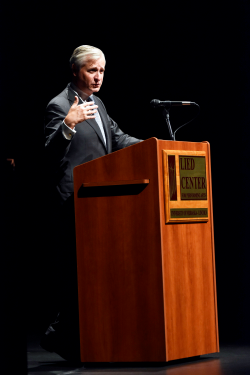 I'm delighted to be here, thank you.  Your presence on a rainy night means a lot.

I want to talk about 1968, and not just because it's the 50th anniversary, though that always helps. I don't know about you all, but I've noticed that the country isn't exactly delighted about the way things are going. My sense is that there's a good bit of public dispiritedness, no matter which side of the divide you're on, actually.

If you voted to send the most unconventional major party nominee in American history to the White House in November of 2016, you were registering, quite tangibly, a lack of faith in the way things were going. If you voted against that unconventional nominee who is now the 45th president, you probably at some point in the last, say, 40 minutes, have considered lighting your hair on fire.

I am here to try to tell you that things have been worse, and we have survived. Not as a message to relax, but as a message to learn from those in the past who have struggled and overcome what I would argue are certainly equal and arguably far more difficult obstacles on the way, on the journey, toward a more perfect union.

Because that's our goal. It's not perfection. It can't be perfection. The founders clearly saw that the best we could do was more perfect, and the Constitution, I swear to God, was written for this kind of moment. It was written because it assumed that we would try to do the wrong thing most of the time. And we have proven that right again and again...