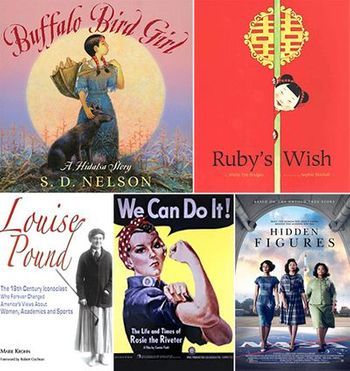 Here is a list of books, websites, documentaries, and feature film  to explore and discuss with your family and friends as we celebrate Women's History Month. Many of these books, documentaries and feature films are available in online formats, although some do require a nominal fee. Please let us know which items you are enjoying, either by email or on our Facebook page.

Shaking Things Up: 14 Young Women Who Changed The World by Susan Hood
Dear Malala, We Stand with You by Rosemary McCarney
I am Amelia Earhart by Brad Meltzer
Buffalo Bird Girl: A Hidatsa Story by S.D. Nelson
I Could Do That!: Esther Morris Gets Women the Vote, by Linda Arms White

She Persisted by Chelsea Clinton
Virgie Goes to School with Us Boys by Elizabeth Fitzgerald Howard
Brave Girl: Clara and the Shirtwaist Makers’ Strike of 1909 by Michelle Markel
Who Was Sojourner Truth? by Yona Zeldis McDonough and Who HQ
Miss Moore Thought Otherwise: How Anne Carroll Moore Created Libraries for Children by Jan Pinborough

Adult:
No Horizon So Far by Ann Bancroft
My Own Words by Ruth Bader Ginsburg
Elizabeth Cady Stanton: An American Life by Lori D. Ginzberg
Eighty Days: Nellie Bly and Elizabeth Bisland's History-Making Race Around the World by Matthew Goodman
Louise Pound: The 19th Century Iconoclast Who Forever Changed America's Views About Women,
Academics and Sports by Marie Krohn
West with the Night by Beryl Markham; Women of the Grange: Mutuality and Sisterhood in Rural
America, 1866-1920 by Donald Marti
The Majesty of the Law by Sandra Day O'Connor
My Beloved World by Sonia Sotomayor
A Warrior of the People: How Susan La Flesche Overcame Racial and Gender Inequality to Become
America's First Indian Doctor by Joe Starita
Victoria: A Life by A. N. Wilson

American Women: A Gateway to Library of Congress Resources for the Study of Women’s History and Culture in the United States

The Unconquered: Helen Keller In Her Story (1954)

MANKILLER (2018) The documentary film celebrating the life of Wilma Mankiller, the first woman to be elected Principal Chief of the Cherokee Nation.

Please bear in mind that feature filmmakers use "poetic license" when bringing these stories to the big screen, so not all information will be historically accurate.