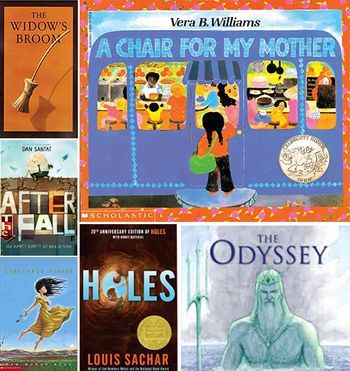 Here is a list of books about perseverance for people of all ages. If you don't have these in your personal library and your public library is closed, consider using a free online reading app such as Kindle or Google Play Books or websites such as Project Gutenberg, Open Library, Smashwords, Blurb, or Wattpad. Your library card may give you access to electronic books via OverDrive or Hoopla. Also, remember that grandparents can read books to their grandkids via Skype, FaceTime and other technologies.

Preschool/Kindergarten:
Rosie Revere, Engineer by Andrea Beaty
Wilma Unlimited: How Wilma Rudolph Became the World's Fastest Woman by Kathleen Krull
Bike On, Bear! by Cynthea Liu
After the Fall: How Humpty Dumpty Got Back Up Again by Regan McMahon
Horton Hears a Who! by Dr. Seuss
The Widow's Broom by Chris Van Allsburg

Young Elementary:
She Persisted by Chelsea Clinton
The Three Little Javelinas by Susan Lowell
Flossie and the Fox by Patricia McKissack
Esperanza Rising by Pam Muñoz Ryan,
Abiyoyo by Pete Seeger
The Most Magnificent Thing by Ashley Spires
A Chair for My Mother by Vera B. Williams
Malala: My Story of Standing Up for Girls' Rights by Malala Yousafzai

Upper Elementary:
Ella Enchanted by Gail Carson Levine
Wonder by R.J. Palacio
A Long Walk to Water: Based on a True Story by Linda Sue Park
May B. by Caroline Starr Rose
I Am Malala: How One Girl Stood Up for Education and Changed the World by Malala Yousafzai and Patricia McCormick

High School:
If I Stay by Gayle Forman
The Fault in Our Stars by John Green
The Old Man and the Sea by Ernest Hemingway
Unbroken: A World War II Story of Survival, Resilience and Redemption by Laura Hillenbrand
Out of Step by Jake Maddox
Holes by Louis Sachar,

Adult Fiction:
Persuasion by Jane Austen
Farenheit 451 by Ray Bradbury
Robinson Crusoe by Daniel Defoe
Roots by Alex Haley
The Odyssey by Homer
Anything Is Possible: A Novel by Elizabeth Strout
The War of the Worlds by H. G. Wells

Adult Non-Fiction:
The Boys in the Boat: Nine Americans and Their Epic Quest for Gold at the 1936 Berlin Olympics by Daniel James Brown
Grit: The Power of Passion and Perseverance by Angela Duckworth
Duke Ellington: The Piano Prince and His Orchestra by Andrea Davis Pinkney
The Unthinkable: Who Survives When Disaster Strikes - and Why by Amanda Ripley
Hillbilly Elegy: A Memoir of a Family and Culture in Crisis by J. D. Vance