D-Day And the Nebraska Connection

As we look back 75 years to D-Day, we need to be reminded of the connection a Columbus native would play on the world stage during World War II. Nebraska National Guard Historian Jerry Meyer recently returned from Normandy, where he accompanied a delegation commemorating the many Nebraskans who contributed to General Dwight D. Eisenhower’s plan to overthrow Hitler.

Adolf Hitler referred to Andrew Jackson Higgins as the “new Noah” for his famed “Higgins Boat” landing craft. But in the middle of the war, a story is told of Dwight D. Eisenhower, Supreme Allied Commander for Operation Overlord, and his concern for landing craft.

In his book, “Andrew Jackson Higgins and the Boats That Won World War II,” author Jerry Strahan relates this story in the introduction:

Captain Harry Butcher, General Eisenhower’s personal aide, wrote that during March 1943, as the invasions of Sicily and Italy were being planned, the
general was confronted with a massive shortage of landing craft. Butcher recalled Eisenhower saying that when he was buried, his coffin should be in the shape of a landing craft, as they are practically killing him with worry.

Andrew Jackson Higgins was born in Columbus, Nebraska and later moved to Omaha when he was seven. He joined the Millard Rifles (Nebraska National Guard) when he was 20. His assignments in the unit included bridging exercises over the Platte River near Ashland.

Following his time in Nebraska, he moved south to pursue a lumber business. The locals wouldn’t sell him prime timber areas but were open to his purchase of swamp lands.

Higgins designed shallow draft boats to extract and bring the lumber out...the same technology that would be used at D-Day in 1944.

He would go onto fame in WWII as the leader of Higgins Industries in New Orleans, La. During the war his company would build 20,094 boats for the armed forces. Most of them would be his famous Landing Craft, Vehicle, Personnel (LCVP), often called a “Higgins Boat.”

The 36 foot wooden boat with a 10 foot steel ramp would be used in every major amphibious operation during World War II. Soldiers would be delivered close to shore by assault transports and the force would disembark down rope ladders to the landing craft.

The “Higgins Boat” was a strategic weapon that allowed our invasion forces to assault anywhere the Navy could take the transports. His design would
play a major part in D-Day. After the war, the Americans and French honored Higgins with a memorial on Utah Beach in Normandy. The Higgins Boat
Memorial is located on the draw leading off Utah Beach close to where General Theodore Roosevelt, Jr. landed in 1944, saying to his subordinates, “We’ll start the war right here.”

The memorial is a partial reproduction of the Andrew Jackson Higgins National Memorial in his hometown. They both feature his “Higgins Boat” waterline steel replica, statues of soldiers assaulting the beach, and a statue of Higgins himself.

The Utah Beach Museum has an original “Higgins Boat” on display. Visitors can walk into the outside memorial boat and get a feel for what it was like to
approach the beach on that fateful day, June 6, 1944.

Higgins was honored in June 2000 with the opening of the National D-Day Museum in New Orleans. It would later become the National World War II Museum. New Orleans is where Higgins had nine plants and hired over 20,000 workers to build craft for the allies.

His workforce was diverse, and he paid them by their skill levels. They responded by shattering production records. Higgins was a household name during the war years for his production genius. One of the first macro-artifacts patrons see at the National World War II Museum is a “Higgins Boat” and the story of New Orleans’ role in producing it.

In 2019, a Nebraska Delegation visited Normandy as part of its Liberation Tour to follow in the footsteps of the 134th Infantry Regiment across Europe. They stopped at the Higgins Boat Memorial to pay homage to the vision and drive of Columbus native Andrew Jackson Higgins. The site of an international memorial to a Nebraska native was impressive on such hallowed grounds.

Andrew Higgins passed away in 1952 and never got the recognition that he deserved for his part in the war. A new generation of scholars is doing research on how important his role was in supplying the Allies with landing craft during the war. He is the only Nebraskan to have a national memorial in his hometown, a national museum in the place where he worked, and an international memorial on a foreign soil.

Please join HN at 7:30 p.m. on Thursday, October 24, for the 24th Annual Governor’s Lecture in the Humanities at Omaha’s Holland Performing Arts Center. In this free public lecture, historian Dwight David Eisenhower II, grandson of General Eisenhower, will discuss “D-Day + 75 in the Eyes  of America’s Postwar Generations.” For tickets and sponsorships to the preceding benefit dinner, please call 402.474.2131. 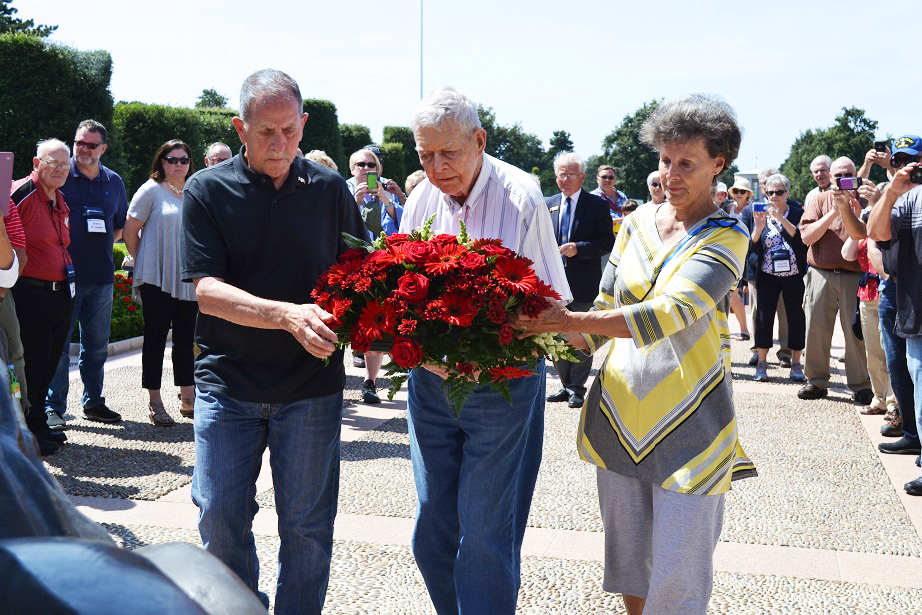